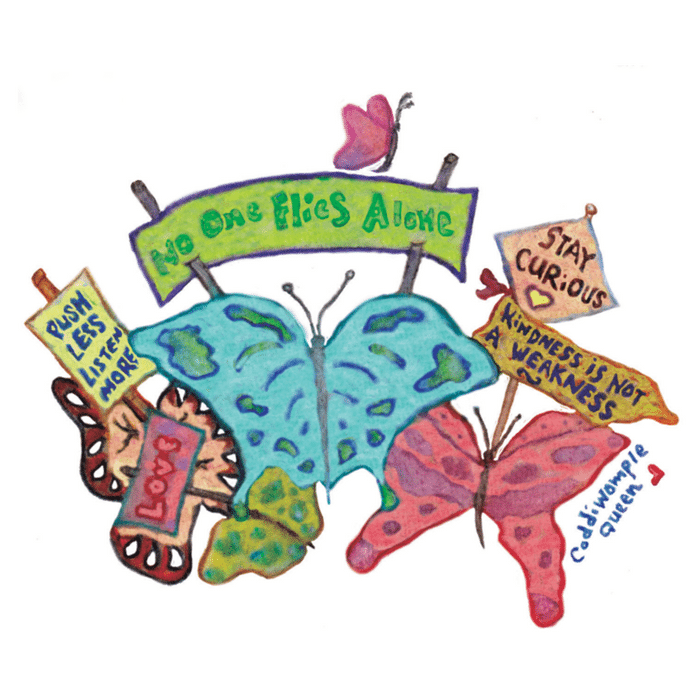 When you announce to the world your marriage is over, (after the apologies) the, “I had no idea,” “Is there someone else,” comes the question, “Are you dating yet?” Seasoned with a- won’t that be fun- grin. Three years later, having perfected my two minute “it’s over” story, adjusted to A LOT of change, I still hadn’t started “the dating” part. Fun? The idea of the slightest emotional involvement even in “yes” to coffee sounded not fun or scary as much as exhausting. The energy required navigating what had been coined the beautiful nightmare, gifts of internal awareness implied, had left me spent.

So where does a sudden channeling of Forest Gump, eating chocolate optimistically, finding some sweet surprise occur? Make each moment a practice in openness, I told myself one day, sucking back the eye roll before straightening my posture where I sat in my car outside an upscale grocery. Today could be different, I thought, heading in toward the ready-to-go section that drew a large lunch crowd of older professionals. Ok, cute guy waiting for sandwich, move closer, nothing, not even a glance. What about sushi…again not even a pleasant ‘excuse me’ for leaning past to grab the spicy tuna. Dairy? And then it hit, the idea that I would meet my or any someone next to ketchup, seriously? So I grabbed a pack of shrimp rolls and a Diet Dr. Pepper, and headed to check out (literally) before walking back to my car.

And that’s when it happened, attention…and from a man. Walking toward my car, an older gentleman a few yards away signaled (and really loudly), “Hey, your zipper’s down.” “Huh?” I looked in the direction he was pointing (along with others in the parking lot) and yes indeed the front of my undies were fully exposed. I smirked, not even that had helped snag a date. “Well played,” I whispered to the fate sisters above before looking him in the eye and smiling, “It is. Thanks.”

“Butterflies, Lisa, butterflies,” I sighed in my car, letting a full eye roll have at it. It was a line from my go to movie, reminding, when you stop trying so hard, the thing you desire will come. Then it hit me, that wasn’t the line. (Yes, you know it.) “Ladybugs, lots and lots of ladybugs,” I corrected, “Damn.” I snickered because in messing up, even this well-known metaphor with my usual quirky brain fart, one I so obviously needed, I had indeed made its point…again. Some times it takes a hammer, (perhaps a Nerf one) but a hammer, I mused.

Seconds later, I put my car in gear and pulled from the parking lot into stopped traffic. And cue the movie moment. On the back window of the SUV in front of me where I sat at a red stoplight was a decal of bright butterflies flying across. I just sat and stared. Swallowing a sip of Diet Dr. Pepper, tears came to my eyes and I smiled. Someone was listening.

A few weeks ago, I attended the Women’s March. At first, not wanting to take part in what I feared would be more hateful and angry banter. The kind that had caused me to stop checking my Facebook feed, something nudged so I put on a raincoat and headed out. I did want to support. I did want to go. My reluctance was not because I didn’t care. Oh, I cared. I cared so much, the overwhelming reality of it all, often paralyzed me. This was real. Children worried about parents being taken away. Uh, real. Women, I respected, justified being referred to as sex objects as just boy talk not because they thought ok, because that’s how it had always been. Uh, yes, real. So, yes I cared. I just hadn’t found my way to do something with those feeling. And I wondered how many people felt the same?

Because of traffic, I parked a few blocks away from the rally and followed the crowd. My plan, lay low behind a paper cup of Earl Grey. Just look; absorb, and silently support. So I stood on a tall wall, sipped and watched and something in me instantly softened. It wasn’t hate I felt all around me, it was, ok eye roll, love. Yes, fierce love… but love. The kind of love that says, ENOUGH not as in- revenge time– as in, this is not ok, life is sacred, life should be respected– stated in all CAPS.

I watched fathers with their daughters on their shoulders, women who like me and looked a little shy pick up their pace, and then two elderly women shuffling down the sidewalk, with signs half slant caught my eye and my throat instinctively swallowed a big gulf of gratitude. We weren’t there to defend why we had a right to exist. Many before and now do and have done this for us, I realized, feeling this different wave of responsibility as the elder couple passed. We are here to exist, in the way only women can- lovingly bold. And feeling into the power of that incoming wave, I spontaneously stepped from the wall.

Butterflies can taste with their feet. They can see ultraviolet light. Some have ears which to sense vibration and as we all know they are the supreme metaphor that transformation leads to unimaginable beauty. They weigh about as much as teaspoon of rain yet can fly for hundreds of miles.

So as I sort out and focus what to do with my feelings on any day I feel into that wave. Kindness is not a weakness and love is not just a sappy lyric in a song. And change is a quirky constant that reminds just show up, and when possible, boldly.

May you show up today and BOLDLY and let the butterflies or ladybugs or whatever needs to arrive…appear. And as you hold, open to what’s to come, a good box of chocolates never hurts.

Posted in Uncategorized
Better Than Botox →