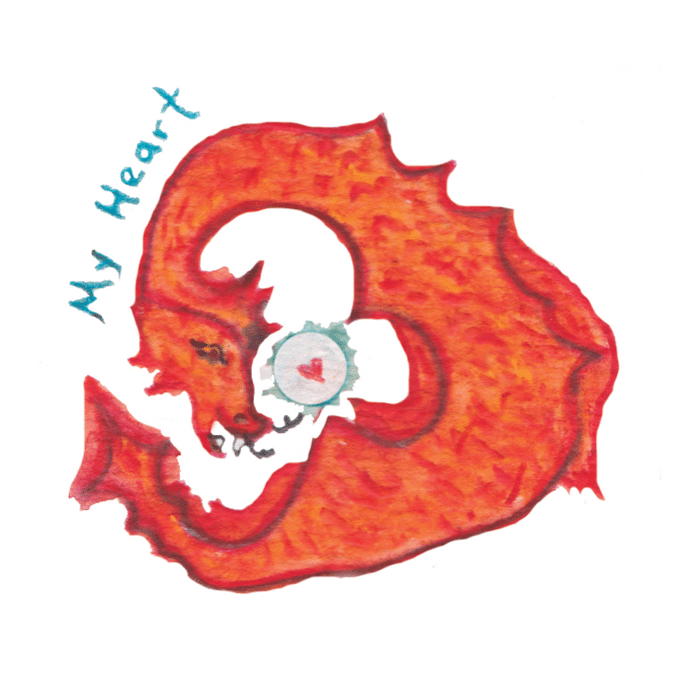 Years ago, I was dropping a fistful of dirty silverware into the sink when my sister-in-law at the time asked what my youngest was doing outside. She pointed in the direction of the cement patio where my son was moving through a series of complicated tai chi like moves. He cupped his hands, kissed the tips of his fingers, and reached toward the sky before swopping his arms downward like two imaginary wings and landed a five-year-old warrior stance. I watched amazed and confused. He had never taken martial arts and these moves surpassed toddler yoga from preschool.

“Not sure,” I murmured, still watching.

Later when my son came inside to avoid becoming mosquito crunch and munch, I asked him about his Zen-inspired performance.

“I was calling my dragons,” he returned in his usual, matter of fact tone. “I’ve got a thousand and one is Golden.”

He then showed me the calling ritual. His body melted into soft form. He touched his heart and kissed the tips of his fingers before continuing through a series of impromptu poises. Once his summon was over, he bowed in a sign of respect. He wasn’t going to slay them and they weren’t his pets either. They were his dragons, an extension of his beautiful, bold little self.

Each time he called to these mystical beasts, the ritual changed but the grave respect and sincerity in which he moved never altered. He had become an old monk, not a five year old with ketchup on his chin.

Of course, over the next couple days, I tried to coax him into calling his dragons for others. Flattery got me nowhere. He just tilted his head, widened his eyes and whispered, “That makes me nervous.”

Thank goodness my consciousness kicked in before I started bribing with cookies. What was so extraordinary about what I witnessed was exactly why he wouldn’t do it on command. You know when you see a movie and there’s that part where the character happens upon some curious moment. A wise stranger arrives with an answer, a sword appears above a lake, or a skinny kid with round glasses runs at a brick wall and lands on an invisible train platform. Even at 45, a voice still screams inside my head, “I knew it!” in such moments, “It’s real.” That thing we can’t find words to adequately explain.

So why was I wowed at my son’s ability to summon a 1000 fire-breathing dragons? This is a kid who took a brown and orange marker and striped his entire body, transforming into a fierce tiger a week earlier. All choices are possible for him. He wants to be a tiger- bam! He is one. Want to invite forward 1000 dragons, just start calling. Whereas, I run my choices through a manufactured “be reasonable” test before acting with such thoughts, like— what will others think? Reasonable? I hope that word never finds his vocabulary. He calls in dragons because he can and that got me thinking. What have I forgotten I can do? What have I tagged with such reasonable-ness as, “I’m too old for this now; it’s way over my head, too risky or good to be true.” When did I become the actual rain on my own parade?

If I’d listened closer, in my son’s firm stance was really the question, “Do you need me to show you something you can already do too?”

And I thought, “Yes, because… most of the time, I’m too afraid to call in dragons.”

And I realized. He wasn’t afraid standing outside on a summer evening calling in his wave of fire breathers. The idea that they might be too much to handle certainly never crossed his mind either. If I announced my own iridescent blue dragon, he wouldn’t think, “How cute. I’ll have her show others her pet.” He’d just nod, ask how far my dragon could blow fire, did it fly upside down and get along with Golden ones, like his?

So I said to my son one morning. “Hey, I think I heard one of your dragons in my room last night.”

He listened intently as I described the sound of the dragon’s tail brushing against the side of my bed. Without blinking he responded, “Yay, that’s one of the babies. Sometimes they get up at night. Just send them to my room next time.”

“Yay. I will,” I returned smiling. Nothing more needed said.

At the end of Willy Wonka, the candy maker reminds, “But Charlie, don’t forget about the man who suddenly got everything he ever wanted.”

The adult brain shouts, “He became lazy. He never learned to share. He lost his worth ethic. Dragons ate him.”

“He lived happily ever after.”

I guess it’s time to call in some dragons. Who knows what might just appear…

Posted in Uncategorized
← Better Than Botox